The Past Week at The Kindu Trust in Numbers

110 children came to the Kindu Klub and Playgroup

44 babies and toddlers took baths and showers at Playgroup

15 home visits were done by the Kindu Sponsorship Team

Setting up Shop with a Start-up Donation!

Stock at the new shop!

Kedire Walle is a 12 year old boy who lives in Gondar with his mother, step-father and step-sister. He plays football in his spare time and is in school at Grade 6 where his favourite subject is maths and he says he wants to be a pilot when he grows up. Kedire’s mother, Asefu, moved from rural areas to Gondar by herself following the death of her parents and worked hard to support herself and Kedire for 6 years. Then she met Kedire’s step-father and they had a daughter named Zemzem. Kedire’s step father works as a guard at a local school and his mother was raising the children but she wanted to work from home so that she could also support the family.

Last month Kedire’s sponsor generously donated a small business loan for Kedire to set up a shop from her home and within weeks of receiving the money she had set up the shop and stocked it with fruit, vegetables, soap and general groceries! Asefu already knew that her home was in a good location to set up a shop and she was keen to use the start up money to support her family and improve Kedire and his sister’s wellbeing. 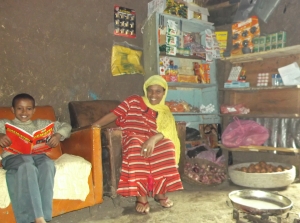 Kedire and his mother work and study at the shop

The Kindu Trust’s sponsorship department in the UK and Ethiopia was involved in this whole process. It’s very important to us that when money is donated it is used in an effective and sustainable way, therefore our Project Manager was able to arrange for Kedire’s mother, along with a few other mothers who had received small business donations, to attend business management training at the local microfinance office. At the training Asefu will learn about budgeting, profits and bookkeeping skills as well as marketing. Now, she will be equipped with the resources she needs to manage her finances and support her family!

If you want to support someone in need in Gondar, an unrestricted donation, is the best way to contribute to The Kindu Trust, as our staff in the field are able to identify those families most in need who could really benefit from your donation. For more information please email kindu@kindutrust.org

Already world renowned for its coffee, Ethiopia is now moving on to producing a quite different type of beverage: wine! There have been vineyards in Ethiopia near Addis Ababa and in the South East since the Italian occupation in 1936-1942 but this is the first time that Ethiopia will be producing wine for international commercial consumption. The wine is produced by Castel who have been producing the nationally popular St George beer since 1998. They have been working with French experts and the Ethiopian government since 2007 to create the wine and this year has seen their first production of 1.2 million bottles.

The experts (from France, naturally) were brought in to identify areas appropriate for growing vines once it was recognised that Ethiopia’s climate was ideal for growing grapes, involving the import of 750,000 vines from Bordeaux. However, there are some challenges to growing the vines in Ethiopia that you’d be unlikely to encounter in Bordeaux; the new vineyards have had to be surrounded by a two-metre-wide trench to deter pythons, hippopotamuses and hyenas. Commenting on the new export, Ethiopian Industry Minister, Ahmed Abtew, was quoted as saying “People who live outside Ethiopia remember the drought a decade ago, but when they see a wine labelled ‘Made in Ethiopia’ … oh, their whole attitude immediately changes”. Letenachen (cheers) to that!